The Axis Mundi is the fourth and final stage of the Babel Trials. This stage will push players to their full limit, and if the player(s) successfully manage to scale the tower, they're rewarded with godhood and will become the new consort to Ishtar, the goddess of fertility.

The final stage of Babel, The Axis Mundi; the very core of the universe! This is the ultimate final test, filled with the holy light of the origins of existence!

Your climb takes you on an invasion into the territory of the gods, where the goddess of fertility awaits. Go forth, and use your expertise and intuition to forge a path to a place only the chosen can reach!

The current version of Axis Mundi (Solo) is rumored to be bugged and virtually impossible to beat in the North American version. However, It is possible to complete in Pairs mode (although it may be more difficult, considering that there are now two players climbing the tower instead of just one).

This however does not apply to the PC version of Catherine where the glitch has been fixed, Axis Mundi now being able to be completed solo. 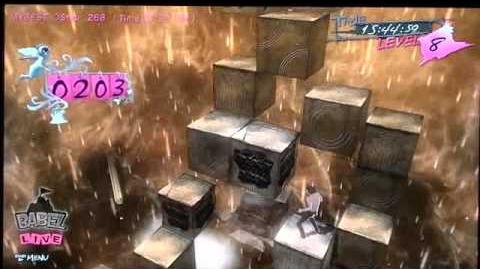 Retrieved from "https://catherine.fandom.com/wiki/Axis_Mundi_(Solo)?oldid=20375"
Community content is available under CC-BY-SA unless otherwise noted.