Catherine is a boss in the one and only level of The Cathedral.

She takes the form of a giant nude demonic version of Catherine with her skin peeling off; most especially on her left arm. Her mouth is exaggeratedly large, showing rows of sharp fangs. Her hair is identical to her human form.

Catherine only has two attacks. Her first is a close range attack that can strike Vincent or Katherine, (Or Rin if The player manages to Unlock the Rin Route in Full Body) resulting in instant death either way. The second is a long range attack that starts halfway up the tower. This attack will show certain blocks in red; if either Vincent or Katherine are on them for too long, red lightning bolts will come down and instantly kill them.

The meaning of this boss is quite straightforward, as Vincent deals with the aftermath of his break-up with Catherine, and what he's going to tell Katherine. The entire nightmare, not just the boss, symbolizes what he fears and hopes will happen when both sides of the life he's tried to keep secret collide.

Vincent fears Catherine's long-term reaction, and that breaking up with her hasn't meant an end to it. He fears she will come back into his life just as he's figured out what he wants with Katherine, and confuse his direction again. Like with the sequence before this boss, he fears that Catherine will cause physical harm against Katherine as revenge. And in the end, part of his hope shows through, when he saves Katherine from giving into her loss of trust, and from losing her own life. In this, he's given himself a brief moment of true happiness, where everything has been taken care of. The boss also symbolizes Vincent's concerns of Catherine's feelings, as he lied to her about not having a partner, and his guilt from letting Catherine down.

During the climb, Catherine constantly insults Katherine; she asks her "You can only get his attention by getting pregnant?" and says "You're just his dead weight!" At the same time, she tries to convince Vincent to forget Katherine.

None; she is not shown being destroyed. 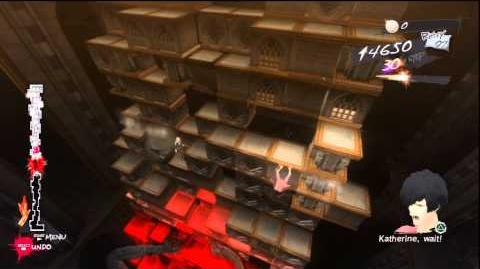 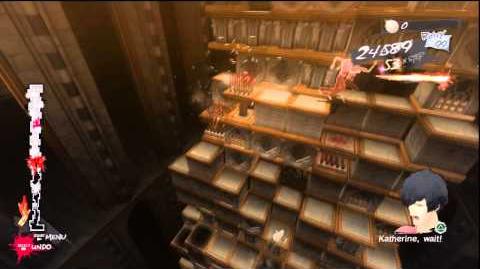 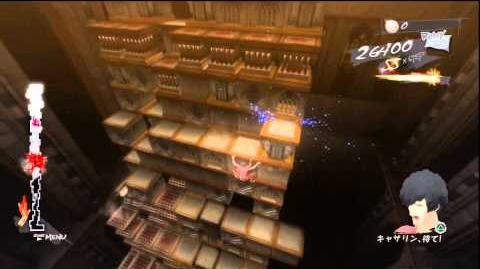 Catherine in her opening cinematic.

Catherine in her opening cinematic.