The Fist of Grudge is the first boss that Vincent Brooks faces in the Prison of Despair.

It takes the form of two twisted female arms with silver hair wrapped around each one (resembling Katherine's), wielding a giant bloodstained dessert fork as a weapon.

Vincent enters the first boss battle. Adjusting to the new environment he was just thrown into, he hears a faint and grim voice: "You...won't...escape..." Vincent sees the Fist of Grudge below him, speculating it to be Katherine. Regardless, he has no time to think as the boss comes at him. After reaching the goal, Vincent reaches the exit door only for the Fist of Grudge catch up and then tries to attack Vincent once more. Fortunately, the bright light emanating from the door halts the Fist of Grudge and repels it, allowing Vincent to escape alive and in relief.

The Fist of Grudge has two attacks. When Vincent is falling behind and stays on the blocks near the Fist of Grudge that are glowing red, she will stick her fork at the blocks and try to skewer him. If he doesn't get to higher ground quickly enough, this will kill him instantly (even if Vincent tries to hang behind a block, the fork will simply stab right through the block and kill him). Otherwise, it knocks him down (if he's standing on a block) and stunning him briefly. Also, if Vincent is standing too close to the Fist of Grudge's hands, he will also die immediately upon contact.

When Vincent is higher up, the Fist of Grudge will slash the tower with her fork, stunning Vincent momentarily while a random number of blocks around him turn into Heavy Blocks. If available, the player should use the Bell to counteract this since if the player takes too long making stairs out of Heavy Blocks, she can easily catch up to Vincent.

The prominent display of cracked vivid blue fingernail polish, silver hair along the arms and the fork is meant to immediately remind the player of Katherine; especially because of the previous scenes focusing on those parts of her. The boss represents Vincent's fear of committing to Katherine, and losing his personal freedom. This is echoed in her lines that focus on entrapment. 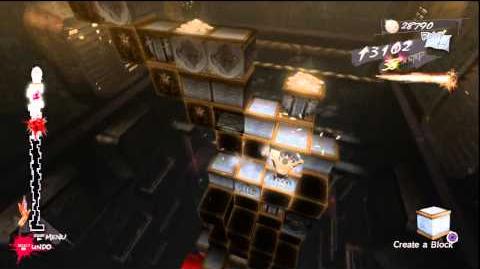 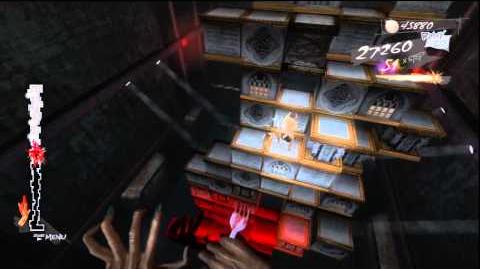 The "Fist of Grudge" reaches out for Vincent.

The Fist transforming blocks into heavy blocks in order to slow down Vincent.

The "Fist of Grudge" is defeated.

The "Fist of Grudge" achievement picture