Rapunzel, also known as Super Rapunzel in Catherine: Full Body, is the in-game arcade video game ain the Stray Sheep which mimics the gameplay of Catherine itself. It is based on the fairy tale of the same name.

The backstory of the game is revealed in Catherine: The Mysterious Tale of Rapunzel. It is revealed that the original game was created by Freddie McGoohan, in order for men to play the game and create favorable relationships with women so they would get their happy ending, and free them from the nightmares.

However, Thomas Mutton obtained the code and turned it into the current version, inserting subliminal messages into it in order to trance the players. Although, it is also likely that Mutton used the game in order to train the victims of the nightmare so that he could find a worthy man someday - someone who could overcome The Great Trials.

In the Freedom Endings, Mutton describes the game as a machine to make it easier for men to become trapped in his nightmares. Most of the chosen men (Orlando, Jonny, Justin, Todd) had a fixation for playing the game. Toby, the only one who didn't have nightmares, couldn't see what was so interesting about it.

The player assumes the role of a prince who must arrange blocks to reach the goal block to complete the stage. While the gameplay in Rapunzel is generally similar to that of Catherine itself, Rapunzel differs with the following gameplay rules:

In Full Body, the player can now choose to watch hints in the Pause menu, in which the game automatically plays itself up to a certain point to give the player a hint in completing the current stage. The player can also toggle the puzzle gameplay of Rapunzel in Config between Classic and Remix, the former featuring the exact same puzzles as those in the original Catherine and the latter option features new puzzles involving Combination Blocks.

There are 128 levels in total (64 levels in each mode), and the player is given given three credits per night; a credit is used when the player fails to complete the stage (either by dying or by giving up). Once the player finishes Golden Playhouse for the first time, "Free Play" will be unlocked on all save files where the player has unlimited attempts. The player's progress in Rapunzel is also saved independently from the game's save files.

The final score in Rapunzel is made up of three things: items obtained, moves remaining (Power Bonus), and current stage (Grade Bonus).

There are items scattered around in the levels of Rapunzel which will boost the player's score as follows:

Power Bonus gives the player 50 points for every unit of power they have left after completing the stage. (Eg. If the player has 15 units left, they would get a power bonus of 750.

The score resets each time the player loses a credit (Prince dying, running out of moves or causing the Goal Block to fall).

In order to access the secret 64 stages of Rapunzel and work towards the True Ending, the player must collect all four Rosaries located on the following levels:

To actually see the True Ending, the player needs to collect another four Rosaries in the same levels as above in "Extra Mode." In this mode, they must first also pick up the Genie Lamp to uncover the Rosaries.

The story of Rapunzel is told through cutscenes: one displays after every fourth stage, told exclusively in rhyme (transcript available here).

The main story follows the fairy tale fairly closely. A witch owns a garden, which Rapunzel's parents steal from. As punishment for this, the witch takes their first-born and names her Rapunzel, after one of the flowers they stole.

At the age of 12, the witch locks Rapunzel up in a tall door-less tower and refuses to let her see anyone else. As years go by, Rapunzel develops an amazing singing voice (learning from birds), and a voluminous amount of blonde hair that the witch forced her to grow as a means of accessing the tower. One day, a Prince happens to find the tower and sees how the witch can climb her hair. The Prince calls down to her, and she lets down her hair, thinking it's the witch.

Thus begins the game, when the Prince has become smitten with Rapunzel, and they hatch a plan where he brings her 8 threads of silk each night for 8 nights, for 64 total threads (stages), so she can craft a ladder and escape. In the game, the Prince must climb a set of block towers before reaching Rapunzel's hair.

As the game goes on, the Prince asks Rapunzel about her past, her parents, and the witch. She grows to like him, and is excited about the prospect of running away. Towards the end of the game (Stage 48) Rapunzel begins to have horrific nightmares, and she becomes terrified the witch has found out about their affair. Though the Prince calms her, she asks him to find four rosaries for her fingers, to drive away the nightmares.

Though the Prince gathers the rosaries in the last stages, she is continually beset by nightmares: the witch cutting off her hair, abandoning her in the desert, or luring the Prince with her severed hair and killing him. (These are all actual endings to the real Rapunzel fairy tale).

After the end of Stage 64, the Prince brings Rapunzel the last silk thread, so she can finish her ladder. As they are about to leave, the witch arrives in a rage and threatens them both. As she is casting her spell, the four rosaries the Prince collected form a barrier, reflecting the spell back onto the witch and knocking her out the window. The Prince and Rapunzel live happily ever after.

After the end of Stage 64, the Prince brings Rapunzel the last silk thread, so she can finish her ladder. As he does so, she begins to contort and cackle, and shows her true form as the witch. She explains she had been taking Rapunzel's form for quite some time, who she calls "impure." The witch then casts a spell on the Prince, who has no protection, and is thrown out the tower window. He lands in the rose thorns below, which gouge his eyes out and blind him.

The story structure of Extra Mode is exactly the same as Normal Mode, though the details change. The opening is the same until the witch speaks in the introduction. Instead of issuing a warning about her tower, she states, "Surely you won't sing your song for just a man."

The Prince hatches his plan to bring her silk to build her rope ladder, and promises to save her. As he continues visiting her, she warns him of the witch, and he begins to question himself as to why he is so in love with Rapunzel. He grows more and more passionate and committed to her, and just as confused why he feels that way.

On Stage 12, the Prince asks Rapunzel to sing a song. The story told in this song is what each cutscene is about until Stage 64, the end. The song, "A Song of a Foreign Land to the South," is a retelling of the real-world myth of "Ishtar's Descent into the Underworld." It's about a glorious queen who lived in the lands to the south and wielded great magic. She went out on an epic quest to seek the Queen of the Dead in order to test her abilities. She set off on her journey with all her magical accessories, and came to a set of seven gates to the Underworld that barred the way to the Dark Queen. The guardian of the gates stopped her, and explained a sacrifice was needed to pass. The Queen decided to sacrifice her royal jester, and sent him to his death.

She passed through each of the seven gates, in each one losing one of her accessories that granted her magical power. By the end, she had nothing and no power left, which is when the Dark Queen struck, and plagued her with countless diseases. As she was dying, she then got strung her up by hair and hung to death.

Back in the Queen's southern homeland, her advisers were at a loss for what to do about her disappearance. They finally decide on a plan: to send a young, charming male rogue down into the Underworld to seduce the Dark Queen and get their own Queen back. The young rogue is sent on his way, and he makes the journey, meets the Dark Queen, and succeeds in winning her heart.

The Dark Queen, completely in love with him, offers him any wish he desires. He tells her he wants the "Water of Life", which she gives to him. He takes this to the dead queen and resurrects her. This infuriates the Dark Queen, who curses the rogue to an eternity in this prison, never to return to his home. The Queen however, is able to strike a deal with the Dark Queen in return for her freedom.

The Queen escapes back through each of the seven gates, regaining her accessories and power as she passes through each one, until she finally arrives back at her castle. She finds her husband at her throne, abusing his new rule and sleeping with several women. She reveals what her pact with the Dark Queen was: she would sacrifice her own husband to the Underworld, so that she might live. So the woman and the man are traded, living and dead, "when the singing ends." Rapunzel ends the song here, explaining that it holds great power to those who understand it, and can provoke a change somewhere.

In the end, the Prince gives Rapunzel the last of the silk threads to make her ladder. As he does, she laments that the song has faded, and that means "the witch and the girl will then be traded." Rapunzel changes form into the witch, who sneers that all men want Rapunzel's beauty, and all are dragged here by their lust. She explains Rapunzel is cursed, and now is condemned as the witch switches places with her, and takes possession of her body with the following chant: "IO NA-RA-AM ISHTAR. IO NA-RA-AM ISHTAR..." (NOTE: NA-RA-AM means "Beloved", see gallery)

The transformation complete, she proposes to the Prince. The game ends with the text: "The curse of a great lady, that brings misery upon the world of men!"

The same ending as the Normal Mode: Bad Ending plays out, but all the text during the cutscene is completely garbled and unreadable. 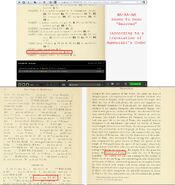