The Shadow of Vincent is the boss of the seventh stage, Spiral Corridor, and is the sixth boss of the game overall.

It takes the form of a giant version of Vincent Brooks clad completely in shadow, wearing a gleaming white mask that covers its entire face in a twisted smile. Only his sickly yellow left eye is visible in the beginning.

After a long and hard struggle, Vincent clutches his pillow once more for security as he enters the door. A grim and deep voice pierces his ears through the darkness below. Startled by the voice, he asks whom he is speaking to. With Vincent aware of the Shadow of Vincent's presence, Vincent proceeds to scale the final tower of the Spiral Corridor. After reaching the top, Vincent encounters Steve Delhomme climbing the same tower as him, both surprised to see each other. Steve reasons for why they're both in the Nightmare World: he thinks both have been cursed by Catherine as revenge for a betrayal.

Before he can say more, the Shadow of Vincent catches up to them. Vincent urges Steve to climb, but he is frozen in fear as the mask on the Nightmare breaks away, revealing the monstrous version of Vincent underneath. It grabs Steve and swallows him whole, much to the horror of the real Vincent who watches helplessly before escaping.

Shadow of Vincent is unique in two ways: it has no direct (random) attacks, and it floats freely around the tower instead of climbing the face of it. All of its actions are scripted encounters that trigger when Vincent reaches a certain height.

The first attack comes at the start of the stage, and is the only one that can directly kill Vincent. Shadow of Vincent braces himself against the wall of blocks on the left side, swishes his head left and right, then smashes his face into the wall, causing the blocks to be flung towards the screen. If Vincent gets hit by any of the flying blocks by placing himself at certain positions, he dies instantly. The killzones of this attack are standing on the blocks directly in front of the wall and even hanging off of those blocks aside from behind the far left block. This attack can be avoided by the aforementioned maneuver or simply staying far away from the wall as the attack proceeds.

Near the first checkpoint, Shadow of Vincent creates a stripe of Unmovable Blocks up the center of a 3-column wall.

Around the second checkpoint, the Shadow of Vincent envelops the entire stage in darkness, leaving only the glare of his mask visible. Only a small beam of light shines around the screen to help the player see.

Throughout the stage, the Shadow of Vincent will turn a large area of blocks red, causing them to drop from the stage which guarantees death for Vincent if he is standing on them. It usually occurs when Vincent takes too long to climb the tower.

Coming after his accusation to both Catherine and Katherine about cheating and being wrong about both, and still left dealing with the guilt of cheating on his still pregnant girlfriend, this boss overall represents everything that Vincent is feeling but is ultimately ashamed of. His obsession with not being tied down, even at the expense of the most important person in his life, of not taking responsibility for anything in his life, and of cheating. Though he is able to hide his feelings to Katherine behind a mask for a long time, the higher he climbs, the more the mask breaks away.

In the end, his choices become clear: either he gives into these feelings and shows Katherine his selfish ugly soul, or he accepts what he wants, no matter how much it scares him, and commits to Katherine. This boss also has a second meaning, but the meaning represents Steve Delhomme rather than Vincent. For Steve, the boss represents the man who's responsible for stealing Catherine away from him. The mask represents the fact that Steve didn't know who Vincent was or what he looked like and loses it once he discovers that the man who "stole" Catherine away from him was actually Vincent all along. 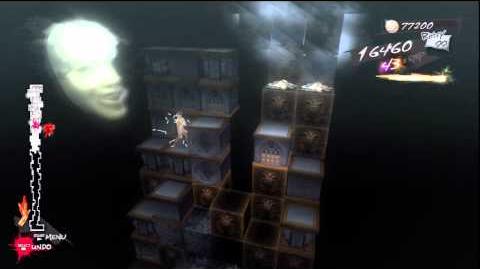 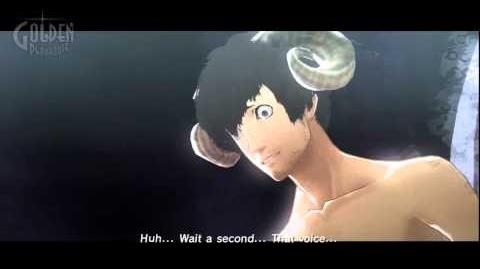 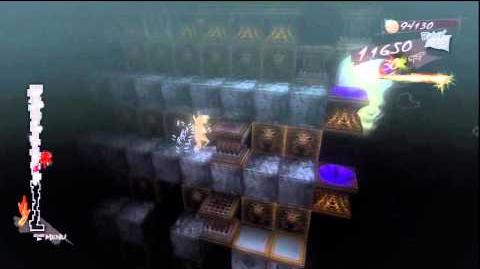 The Shadow of Vincent's mask shatters.

The Shadow of Vincent begins an attack.

Vincent's Shadow without the mask.

Vincent's Shadow without the mask.