— Steve screaming for help from Vincent

Steve Delhomme, also known as Sheep with a Tie and Tie-Wearing Sheep, is a sheep in the Nightmare world, and one of the first sheep Vincent Brooks meets.

Although initially helpful to Vincent, Steve eventually turns against him after learning that Catherine is involved with Vincent, having directed his anger at Vincent instead of Catherine. Despite this, Vincent keeps his identity from Steve as a sheep.

Catherine: The Novel reveals a few traits about Steve. He was the captain of the football team in college. He is a regular at a gym. He has been working as a dentist for almost 20 years, meaning he has been interested in becoming a dentist since his early-mid 20s. Steve was married, but he felt unsatisfied with his nagging wife whom he compares to a chicken. For the past 20 years of his life, Steve never cried.

He met Catherine some time before the game, who appears to him as his ideal woman; a woman with a bob-cut whose ID says she is 20. She is also implied to be of Asian descent, has freckles, and black hair. Steve cleans her teeth but doesn't bill her because he is so infatuated with her. Steve makes plans to divorce his wife, giving up everything to be with her. His neighborhood had known him to be feuding with his wife, and he constantly bragged to everyone he knew about how he was sleeping with Catherine. Steve's behavior traps him into the nightmares.

Steve eventually learns of Catherine's betrayal after sneaking a look at her phone during one of her treatments, noticing that her inbox is full of explicit exchanges with other men. He eventually went on a stalking session and followed Catherine inside one of the men's apartments, overhearing her involvement with him, causing him to cry for the first time in 20 years. However, when Catherine leaves, Steve proceeds to physically assault the man.

From this day onward, Steve became fixated on the other men in Catherine's life. Using the data he had transferred from Catherine's phone, he made calls to every man it seemed like Catherine had been dating, threatening them and telling them to break up with her, and if they didn't he would kill them. Steve still viewed Catherine as pure and viewed her as a victim being deceived by corrupt men and unable to turn them down. Steve viewed himself as Catherine's savior, her true lover, and the only one who could set her free from her "predicament."

Finally, Steve gave up. There was no point in continuing; it was a waste of time and energy and, more than anything else, his heart couldn't take any more, so he admitted defeat. Steve decided he needed to beg Catherine to stop seeing other men.

Steve met up with Catherine and confronted her, but she told him she knew he was stalking her and threatening other men. She told him to shut up and that she didn't want to see Steve anymore, and that she only had him treat her teeth because he was skilled at it, even overlooking Steve's weird behavior during their appointments. Steve turns desperate but can't stop her from leaving.

Eventually, Steve learns on the news that the men Catherine saw were killed by "weakness". Having jotted down Vincent's phone number earlier, Steve decided to phone call Vincent to discover Vincent's role in all of this.

Once Vincent's Nightmares begin, Steve is the first one to offer help or support (shouting down as he climbs) by giving him a 'tutorial' on how to get through the first few levels.

On the Landings, Steve appears as "Sheep with a Tie" or "Tie-Wearing Sheep," and explains the dire situation Vincent is in and how there's no hope but to climb. Though he doesn't elaborate, he suggests early on that he has a theory to why the Nightmares happen.

After Day 2, Steve disappears until 4-1, where he starts obsessing on seeing "her" again. He continues showing up sporadically, acting more psychotic each time, until 7-5.

On Day 3, Catherine breaks up with Steve by telling him she's seeing someone else: Vincent. Having truly lost everything now, he falls into a deep paranoid depression, stalking Vincent and phoning him with threats on Day 5, forcing him to break up with Catherine.

On Day 6, he receives a phone call from Vincent, telling him that Catherine has never heard of any "Steve." Steve goes on to physically describe what he thinks Catherine looks like (non-Caucasian, his ideal woman), which causes Vincent to disregard all his claims. At this point, Steve falls into a deeper bout of insanity, caused by the complete disappearance of Catherine and the insistence from everyone that she didn't exist. (Vincent would later experience this following Steve's death. Steve likely had his cell phone wiped of her messages as well).

His repeated claims that "it" is coming for him indicate he is more aware of his nightmares during the day than most others.

Steve would finally meet with Vincent when they were both fleeing from the Shadow of Vincent. After a last desperate cry for Catherine, he comes to realize who Vincent actually is and his (slightly incorrect) reasoning for why they're both in the Nightmare World: he thinks both have been cursed by Catherine as revenge for a betrayal.

Before he can say more, the Shadow of Vincent catches up to them. Vincent urges Steve to climb, but he is frozen in fear as the mask on the Nightmare breaks away, revealing the monstrous version of Vincent underneath. It grabs Steve and swallows him whole, much to the horror of the real Vincent who watches helplessly before escaping.

In the following day, Steve is reported to be dead on the news. 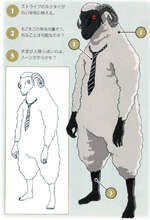 "There's got to be some reason why we were all brought here..."

Steve looking over his shoulder

Steve's Fate - He is decor